07:15 local time, and I’ve just touched down at O. R. Tambo International Airport, Kempton Park, Gauteng, South Africa. This would mark the start of a whirlwind 36hour trip to the Cradle of Humankind and Kevin Richardson?Wildlife?Sanctuary with Mercedes-AMG and their all new Mercedes-AMG G63. 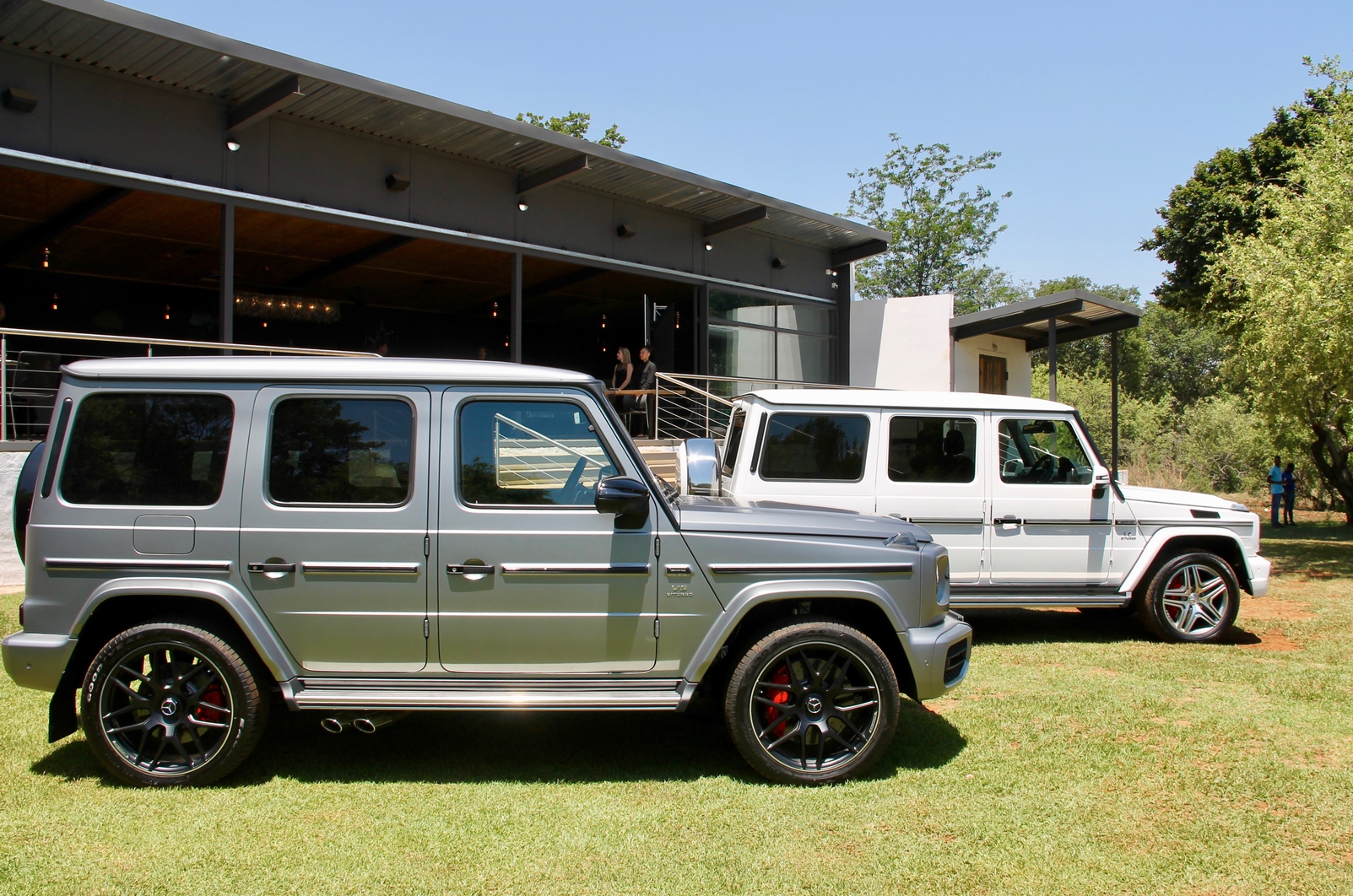 An hour or so after landing at O.R. Tambo International and we are pulling up to The Cradle Boutique Hotel, to the north west of Johannesburg. The Cradle Boutique Hotel is situated on 7,000 hectares of private nature reserve, that boasts 16 timber & thatched roofed luxury self-standing cottages, in the 47,000 hectares UNESCO Paleoanthropological World Heritage site known as the Cradle of Humankind. 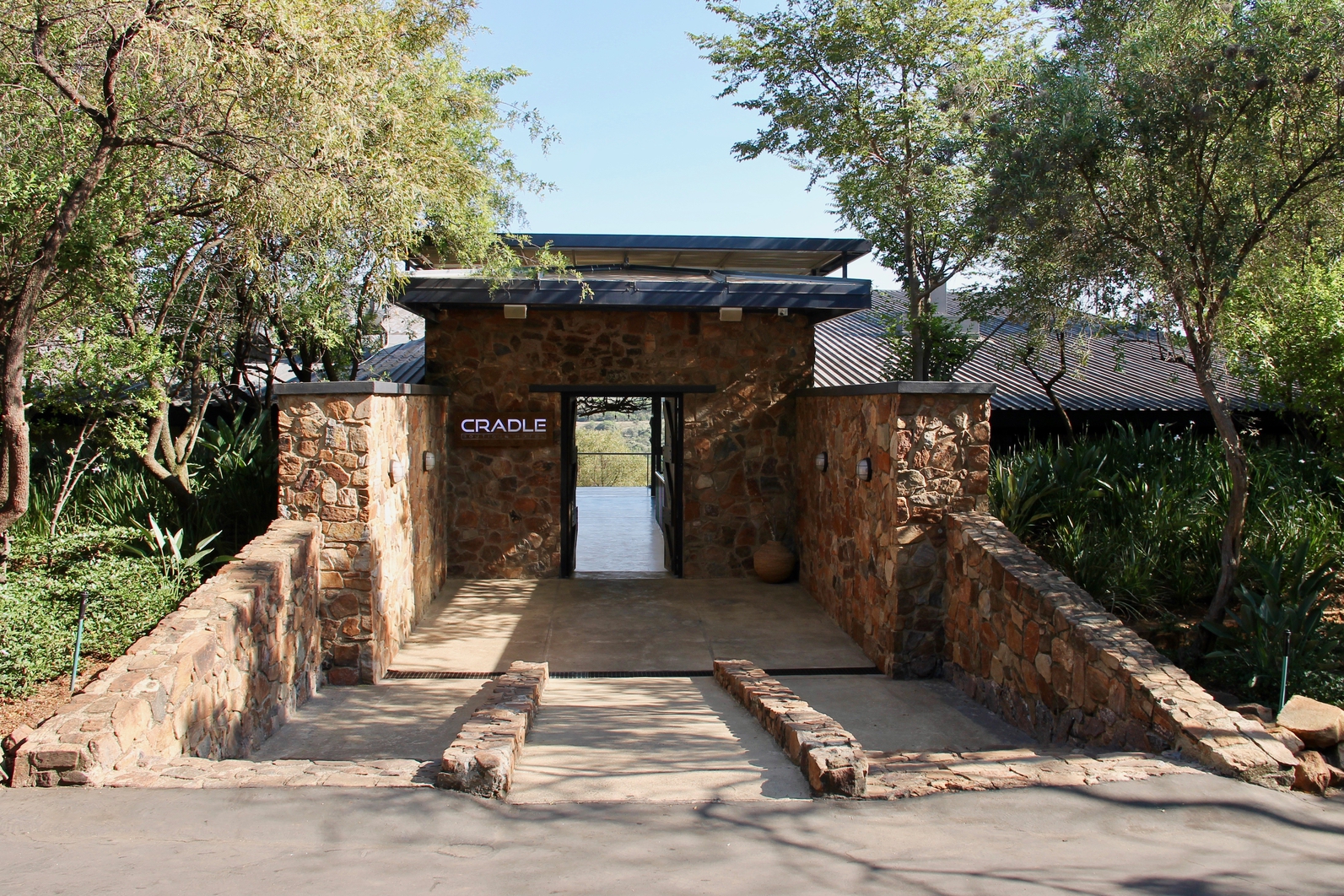 Situated in the Cradle of Humankind are the Sterkfontein Caves, a network of caves that have produced more that a third of the early hominid fossils found prior to 2010, some of which date back around 3.5 million years.
The Cradle Boutique Hotel on the other hand is a lot younger, but worthy of being in the same surroundings, run to subsidise the understating and preservation of the heritage and landscape surrounding the hotel grounds. Some of the many options available to visotrts to this area of outstanding natural beauty include, private safaris, fossil explorations, games walks and magnificent views of the Highveld. 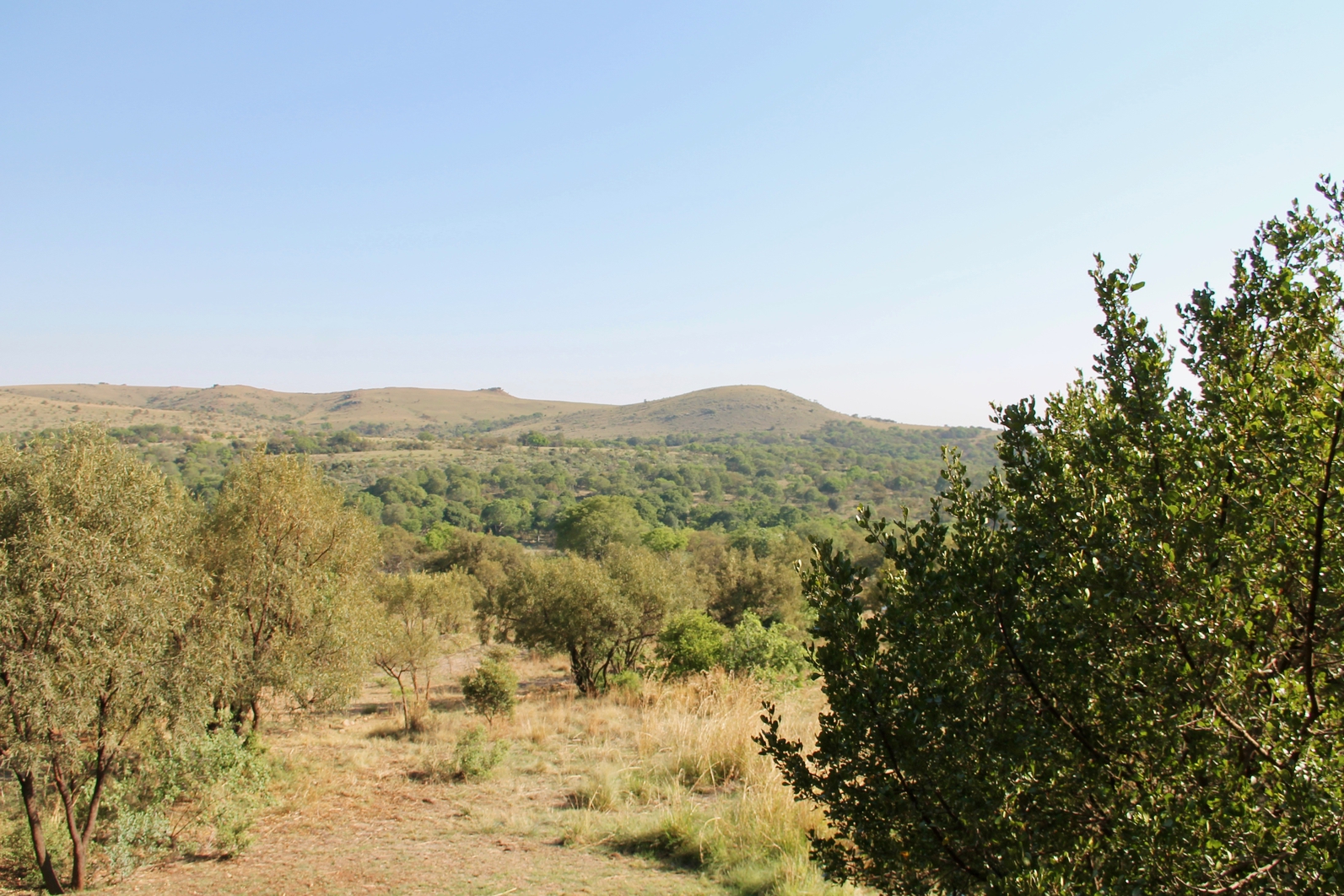 After checking into the Cradle Hotel, we arrived at the latest addition to the Hotels new pavilion. Positioned in front of the Pavilion area three new Mercedes-AMG G63 AMG’s, two of which are Edition 1. With the new 4.0-litre biturbo V8 replacing the previous generations 5.5-litre biturbo V8, it develops 585 horsepower and 850Nm whilst also hitting 100km/h in just 4.5 seconds on its way to a 220km/h top speed, or 240km/h with the optional AMG Drivers package. This new engine is mated to a 9-speed automatic transmission that now has a model-specific calibration, meaning the engine and transmission are in greater unison.

Inside the cabin, there is a redesigned dashboard that blends two 12.3-inch display screens seamlessly joined together, with three different views being available, “Classic”, “Sporty” and “Progressive”. There is also a new AMG Performance steering wheel wrapped in nappa leather, a perforated grip and flat bottom, which comes as standard. The exclusive “Edition 1” edition G63 is the flagship model of the range, and comes with additional paint options and matte-graphite grey sports striping along the side of the vehicle. The 22-inch cross-spoked wheels are finished in matte black with a red painted rim edge. The red highlights continue through the cabin with red contrasting stitching on the dashboard, centre console, door panels and rear seats.

Opposite the line-up of new G63’s are five classic G-wagons from throughout it’s history, all brought along by members of the Mercedes-Benz Gel?ndewagen Club of Southern Africa. Through this line up you could see the evolution of the G-wagen, and how it still kept the same characteristics and details that the originals did 40-years previous.

After lunch and the introduction to the new Mercedes-AMG G63, we were handed the keys to our ride for the first driving experience, a matte-black Mercedes-AMG G63 Edition 1. After leaving the hotel we headed north-west, giving us a chance to test the new G63 on some faster, flowing ‘R’ roads. Thanks to its new front axle arrangement and electro-mechanical steering the G63 feels more grounded, agile and direct whilst sweeping round these long and tightening bends on our way to Derby in the neighbouring North West Province. Around Halfway through our drive we pulled over for a short photoshoot with another of the edition-1’s.

After the photoshoot I switched in to the passenger seat for the short trip back to the hotel. On the inside the new G63 feels more spacious, with a more user-friendly layout and a very similar infotainment system that Mercedes-Benz began rolling out with the E-Cass the previous year. One essential feature on a hot day like today is the cooling seats, that when combined with the smooth ride of the G63 in comfort mode and the massage function of the seats, is very reminiscent of the S63.

Once returning to the hotel, there was time to quickly freshen up before sundowners by the pool followed by a bush cookout with entertainment from some tribal dancers.

The next day it was an early start, and back in to the G63 AMG First Edition to powering our way northwesterly through rush hour traffic around Pretoria to make our way to Kevin Richardsons Wildlife Sanctuary. You may have heard of Kevin Richardson and his Wildlife Sanctuary before, as he is commonly known as “The Lion Whisperer”. Kevin’s Sanctuary is a self-sustaining African carnivore sanctuary for the purposes of wild species preservation. With the aim of teaching and bringing awareness to the ever increasing decline of lions and other large carnivores due to decreasing habitat, illegal meat trade, hunting, disease, and other illegal trades.

After a tour round the sanctuary there were background stories on all the lions. These stories included the life each one had led, how they had ended up in his sanctuary and some of the ailments and diseases the lions had due to their upbringing in “Lion Farms”, where they were destined for nothing more than to be a rich tourists trophy hunt, or to be ground down into an east-asian traditional medicine.

Mercedes-Benz have been in partnership for the past couple of years with Kevin, supplying him with his own G-Wagen, and offering support and platforms when needed to get the ever increasing severity of the plight of the Lions out to the wider world. One way in which the Lions lives are enriched at the sanctuary, compared to other Wildlife Parks, is Kevins ability to create a bond with the Lions. This allows him greater access and freedom with the Lions, allowing hime to observe and interact with Lions in their enclosures, ranging from feeding them to play fighting and grooming them. 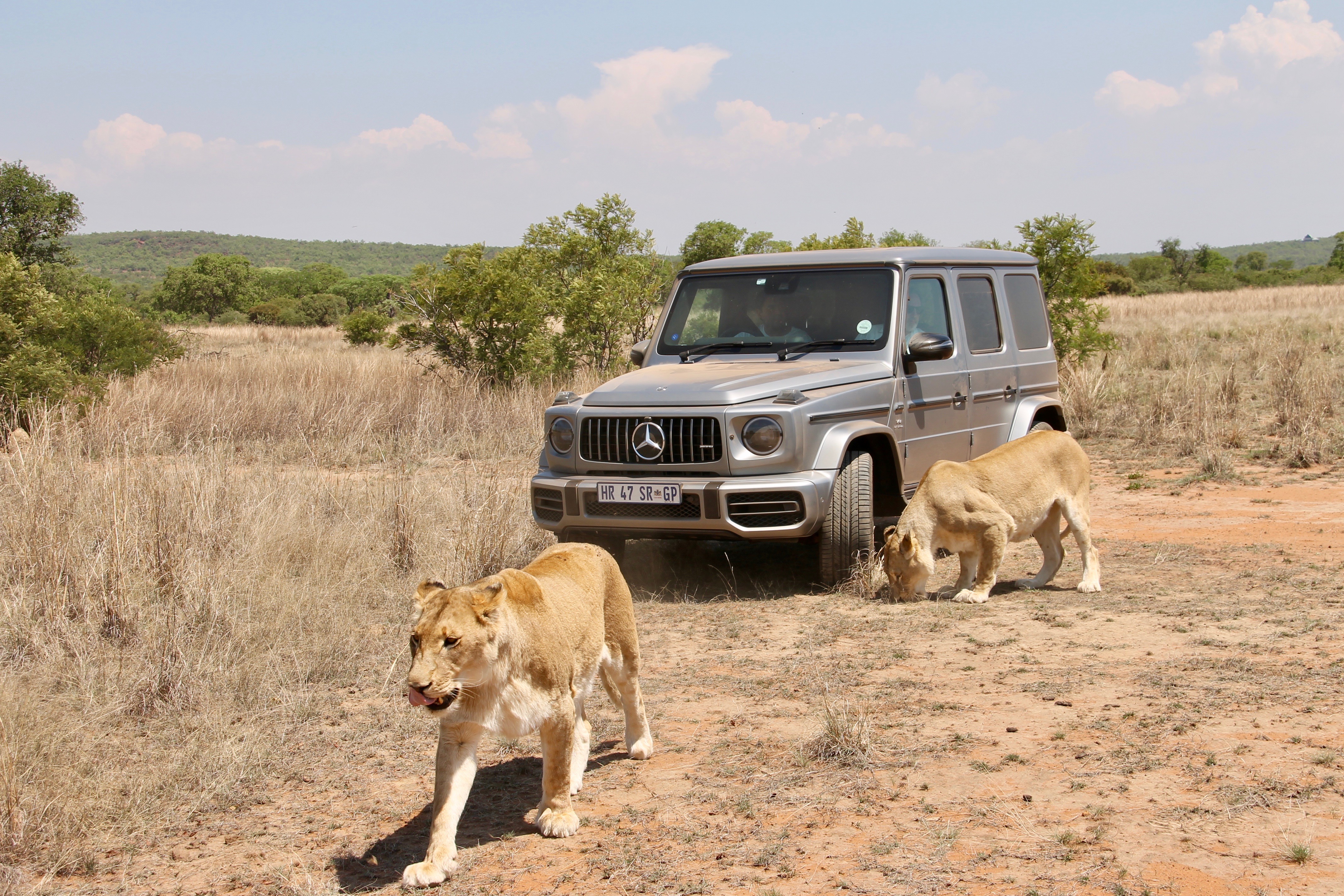 This includes taking the lions out in small groups to specially demarcated areas away from their enclosures, where the lions are able to stretch their legs and get environmental enrichment from their surroundings which in turn helps to stimulate and keep their brains and body active. We joined Kevin on one of these enrichment walks with one of our G63 AMGs and a viewing 4×4. Once the designated spot Kevin arrived with the Lions, they explored the area surrounding the G63 wondering freely around, heading back at the sound of his voice and bonus of fresh meat. For around 45-minutes the two females and one male lion casually explored the chosen area, the G63, and the small amount of surrounding shade as temperatures soared, before it was time to head back.

Whilst loading the Lions back onto their truck for the short journey back to the sanctuary, we saw that they still had their big cat personality too, they were fighting over the last bit of fresh meat on the floor of the truck. It was then time for us to round up the remaining G63 AMG’s and find our way back out of the sanctuary and on to the R573 and then M18 for the drive back to The Cradle to for a late lunch, and to depart for the airport.

So, 36hours after landing in South Africa I was back on a Boeing 737, with the same cabin crew that I flew down with, reminiscing about this amazing trip, and the Mercedes-AMG G63.
The G63 is a big step up over the previous generation of G. It feels more responsive under throttle and smoother in the gear changes with its new gearbox calibration, whilst the new suspension set-up makes it feel sturdier and more comfortable at high speeds in the corners.

It’s also worth mentioning the fantastic work Kevin and his team are doing in looking after all their animals, whilst also bringing new exposure and insight to the realities of the majority of the Lion Parks, and the trade that goes on behind them, and how they can and showed be brought into line so that we don’t lose more endangered species. 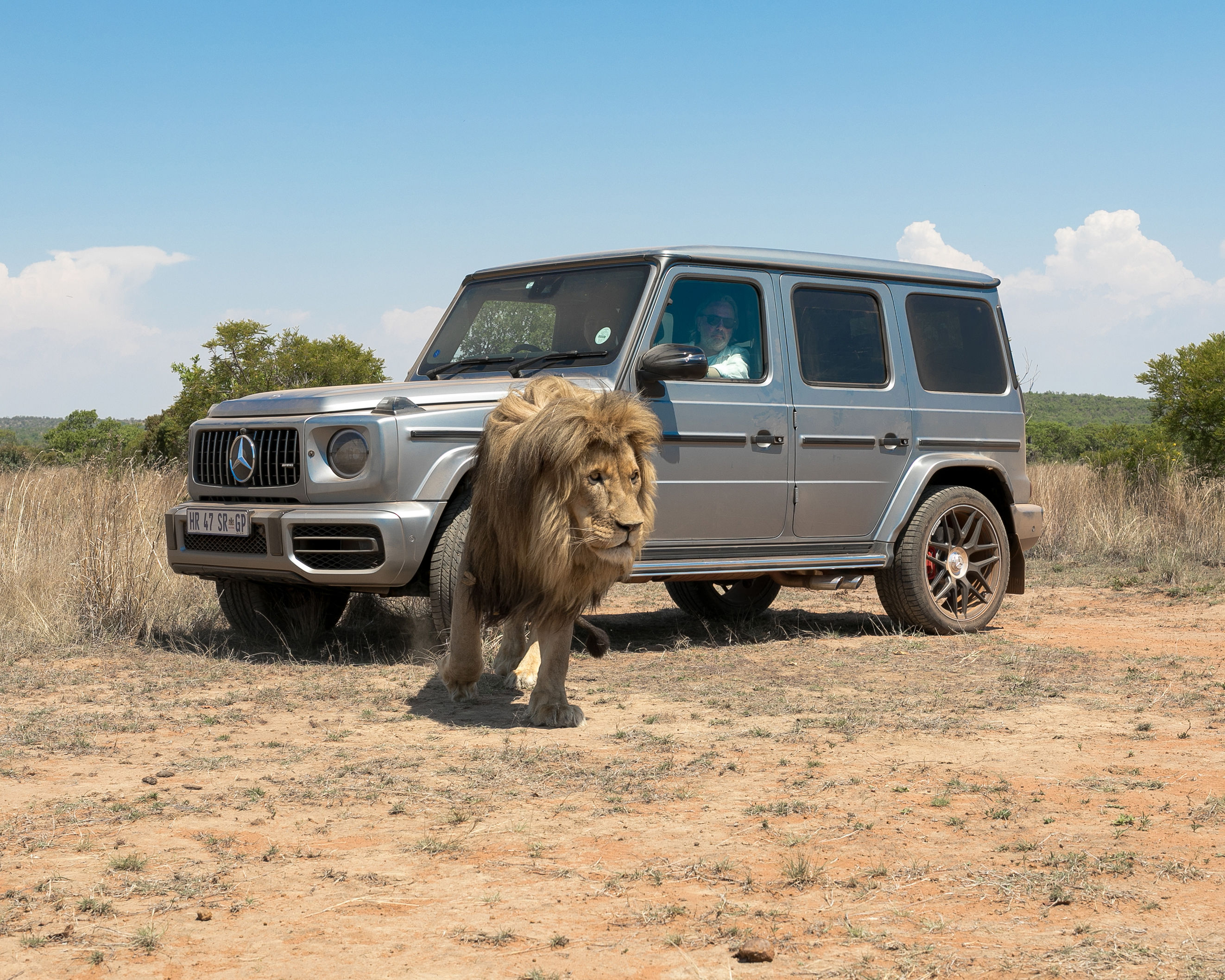 For a full review of the Mercedes-AMG G63, read Des Sellmeyer’s review here

You may also likeMORE FROM AUTHOR

600hp for the New Mercedes-AMG A45 S by Renntech

There are no comments

600hp for the New Mercedes-AMG A45 S by Renntech

© Copyright GTspirit Limited 2005-2020
By continuing to use the site, you agree to the use of cookies. Accept
大相焦在线观看